This is a high quality 112-page PDF download of Maximum Rocknroll #390, the November 2015 issue, featuring AS MERCENÁRIAS from Brazil, Toronto's Not Dead Yet festival, OBNOX out of Ohio, SBSM from Oakland, Edmonton's STRANGLED, Chicago's own POPULATION, PDX rockers EMASCULATOR, Chatanooga's Do Ya Hear We? fest, NJ/Bay Area pop-punkers PARASITES, plus photos from the opening of DIY Space for London and Springfield, IL's Dumb Fest 3D. (Details below.)

It’s time for Maximum Rocknroll #390, the November 2015 issue! On our cover: AS MERCENÁRIAS, DIY post-punk legends from Brazil whose revelatory 1983 demo was just reissued on Nada Nada Discos. This issue also includes two conversations spanning the punk festival circuit: Not Dead Yet organizer Greg Benedetto sheds light on the motivations behind punk promotion, the ethical challenges of a growing fest, and a perfect day in Toronto; further south, organizers and performers alike pitch in on a brief oral history of Chattanooga’s Do Ya Hear We fest. Even more interviews in these pages, direct from the source: famously prolific MPC-augmented Ohio punks OBNOX; revolutionary Oakland noise voyagers SBSM; the dark and entrancing STRANGLED out of Edmonton; severe and austere Chicago post-punkers POPULATION; the raw noisy hardcore pandrogynous agenda of Portland’s EMASCULATOR; and last but not least, our first-ever interview with PARASITES in their nearly 30-year history spanning New Jersey and the Bay Area. As if that weren’t enough for you, we’ve also packed in photo spreads from the opening weekend of DIY Space for London and, from the dead center of the midwestern freak beat underground, Springfield, IL’s Dumb Fest 3D. All of this, the columns you love to loathe, and the most extensive reviews section in the wide world of punk print. 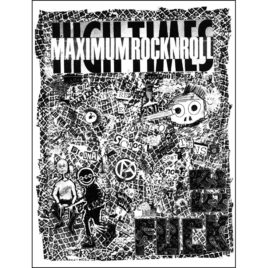 This is a high quality 128-page PDF download of Maximum Rocknroll #382, the March 2015 issue, featuring our extensive 2014 Year End Top Tens, plus legendary SST producer Spot, NYHC rippers IN SCHOOL, PIG DNA, and a scene report from Grenoble, France. You will receive a link to download this issue once payment is complete.
$2.98 Add to cart