SPECIAL ISSUE ALERT: Maximum Rocknroll #396 is here, the May 2016 issue, the zines special edition! We’ve got over a dozen features on zines from all over planet Earth, each of them revealing a living print culture that is truly killer, absolutely vital and undeniably punk. Emmy Ramone talks about their zines Cretins of Distortion and the Mental Whiff, digging at the roots of human expression through punk in the Midwest and beyond; Alex Ratcharge conducts an interview with NUTS! fanzine: learn all about the long journey from Olympia to New York City and all the ink stains in between; Golnar Nikpour interviews the world’s number one fan of noisy and psychotic hardcore, Tom Mayhugh of General Speech. Getting personal: Fluke fanzine celebrates its 25th anniversary and Burn Collector’s Al Burian talks about his music and his move from New York to Berlin. From the Bay Area we have As You Were, a comic zine anthology based out of San Francisco from label/publisher Silver Sprocket; Not Shit, a skate fanzine dedicated to the punk/DIY approach, and the Enthusiast, a brilliant and ASCII art-laden email newsletter. The folks behind No Shame, a distro that highlights work by people of color, write about eight of their favorite zines. Across the water there’s Another Subculture, an annual audio mag released on cassette in the UK: editor Ben Perkins expounds on the nature of capturing the moment and keeping the thrill of zinemaking alive in audio. Down in Barcelona, Mierda editor Dani Frutos goes head to head with interviewer Paco Mus on everything from Barcelona punk’s tenuous relationship with Europe and the world to anarchism and Catalonian independence. There’s also an interview highlighting the Finnish Fanzine Archive, a project digitizing over 300 Finnish fanzines dating from 1977 to 1982. Rounding it out is a feature collecting almost half a dozen current video zines, your favorite columnists, all the reviews you can possibly bear to read, and a photo spread from Everything Is Not OK Vol. 2. Don’t miss it. 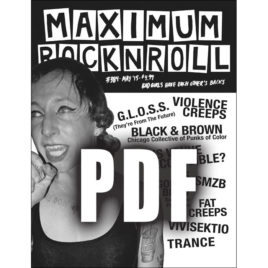 This is a high quality 120-page PDF download of Maximum Rocknroll #384, the May 2015 issue featuring Olympia's G.L.O.S.S., Bay Area powerhouse VIOLENCE CREEPS, Spain’s TRANCE, SMZB from China, Boston's FAT CREEPS, Chicago’s Black and Brown Punk Shows, the Is This Venue Accessible? website, San Diego punk doc It’s Gonna Blow, and Finland’s VIVISEKTIO. (Details and links below.) You will receive a link to download this issue once payment is complete.
$2.98 Add to cart